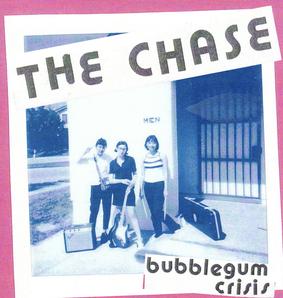 - The name comes from the song/video played after beating the first 2 levels on Ms. Pacman called "Act 2: The Chase."  The band was originally called Yucky Charms.

- We never officially played a show as The Chase.

- The guitar and bass used on the recording are both called J.B. Player Sledgehammers.

- Anna's sister was supposed to take the band photos for the record but couldn't make it that day so we stood around with our instruments and asked random people to take our photos with a Polaroid.  The one who took them was named Chris Mott and we never saw him again.

If you were a bored teenager in the '90s, you did two things: write zines and start bands.  While doing the former, I became pen pals with Seth Bogart, a kid in Arizona writing a hilarious zine called Puberty Strike.  Although we didn't meet in person for over two years, we emailed and talked on the phone semi-regularly and one day I proposed that his band, The Knock-Ups, and my band, The Chase, should make a split LP.  Seth was game and I had saved up a lump sum from my job at the public library for pressing so we retired to our separate quarters to record.  In the Knock-Ups case, this was a studio with the bill footed by Rhino Records as The Knock-Up's would be recording a cover of "Johnny Are You Queer?" for a Rhino comp CD in the same session.  For us, that was drummer Abigail's garage with the closest thing we could find to a four-track: a dual-cassette karaoke machine Abigail's parents had purchased for parties at their house.  I put one microphone in front of my guitar amp and the other hanging between the bass amp and drums to record the instruments, then moved the tape to the second slot so Abigail and I could sing over it.  To this day, I believe the only thing that salvaged the recording was being able to borrow the expensive mics my dad (a professional flamenco guitarist) used to play at weddings.


The pressing ended up being a disaster: Rhino threatened to sue us over The Knock-Ups including an alternate version of "Johnny Are You Queer?", making us remaster the entire record.  The remastered plates broke at the factory so the original was used, including the offending cover, but Rhino's comp had already come out and hadn't been the commercial success they were expecting so they didn't really care.


The original split LP was very well-received, getting positive reviews in Maximumrocknroll, Roctober and Tobi Vail's Jigsaw fanzine.   The 550 copies we pressed sold out by the end of the year and the record has been pretty hard to find since.  I've seen it in a record store bin exactly once in the last 15 years but it occasionally comes up on Ebay.